Evolution of a Product

Products evolve over time; the characteristics of an early-stage product are quite different from those of a mature one. For strong products, the phases of growth usually resemble an S-curve (see Figure 1): in the Early phase, growth is modest and shallow. Then it accelerates as the slope arches upward during the Growth phase. This is followed by a Hyper Growth phase—a period of exponential growth. After maximum growth is reached, growth tapers off and the product begins its Mature phase, during which there is little to no growth.

Below, we describe the dynamics of each phase to help you set expectations for your product. Note, consumer businesses tend to proceed through these phases far more quickly than enterprise businesses; for example, Google Search achieved its scale in a few years, while Google Apps for Domains continues to mature years later. 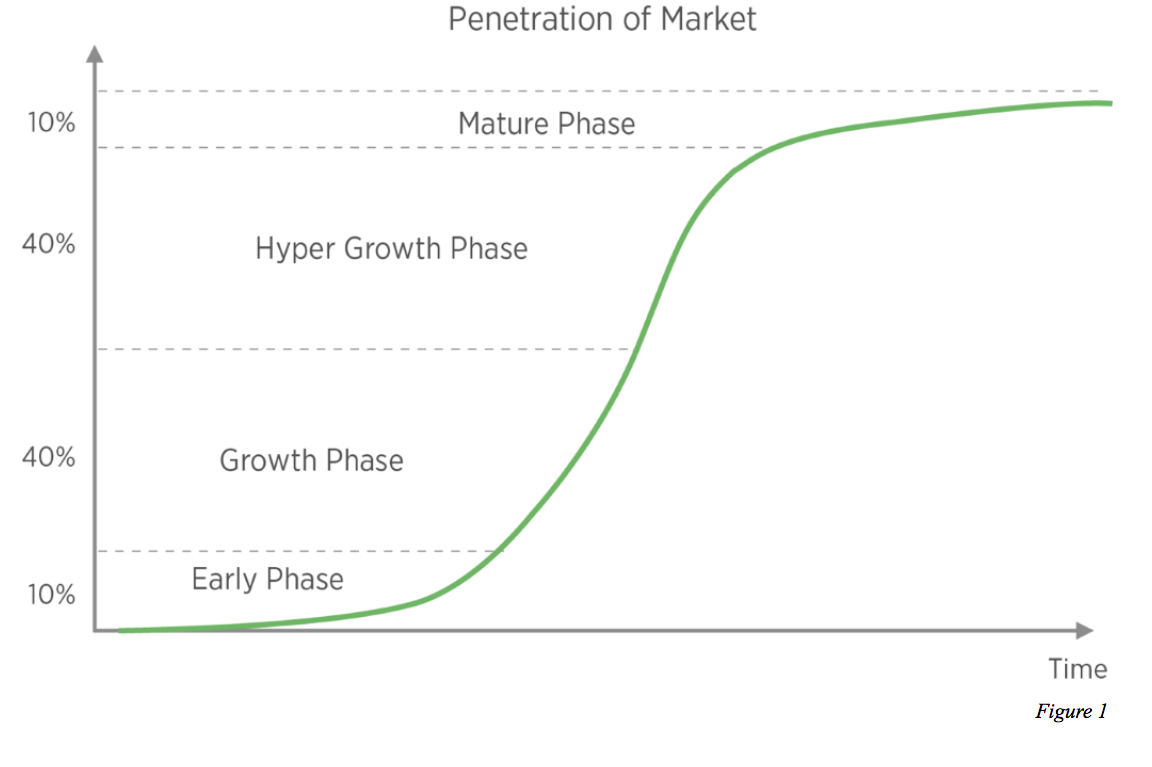 When a new product launches, it is difficult to know whether people will use it in a way that aligns with your vision. The initial goal is to get the product adopted by a few thousand people who you have hypothesized will love it—it is better to have a few users who love a product than many who simply like it. For about a month after launch, many users will try the product for novelty; some will stick with it and become early adopters, while others will leave.

During this phase, there is a scarcity of data, and what data you do have likely isn’t reliable or representative of the product’s long-term future. All monthly active users (MAUs) are also new users, and there is no churn or resurrection. (Note: the total number of active users for a given time period is the sum of retention, resurrection and new users.)

This changes in the second month. While there is still no resurrection, you are beginning to see churn from first-month users. In the third month, a balance between new users, churn and resurrection begins to emerge. Resurrection is small, and new users remain the largest factor, but churn has started to contribute significantly. Your month-over-month net user growth depends entirely on the Quick Ratio: (new users + resurrected users) / churned users. 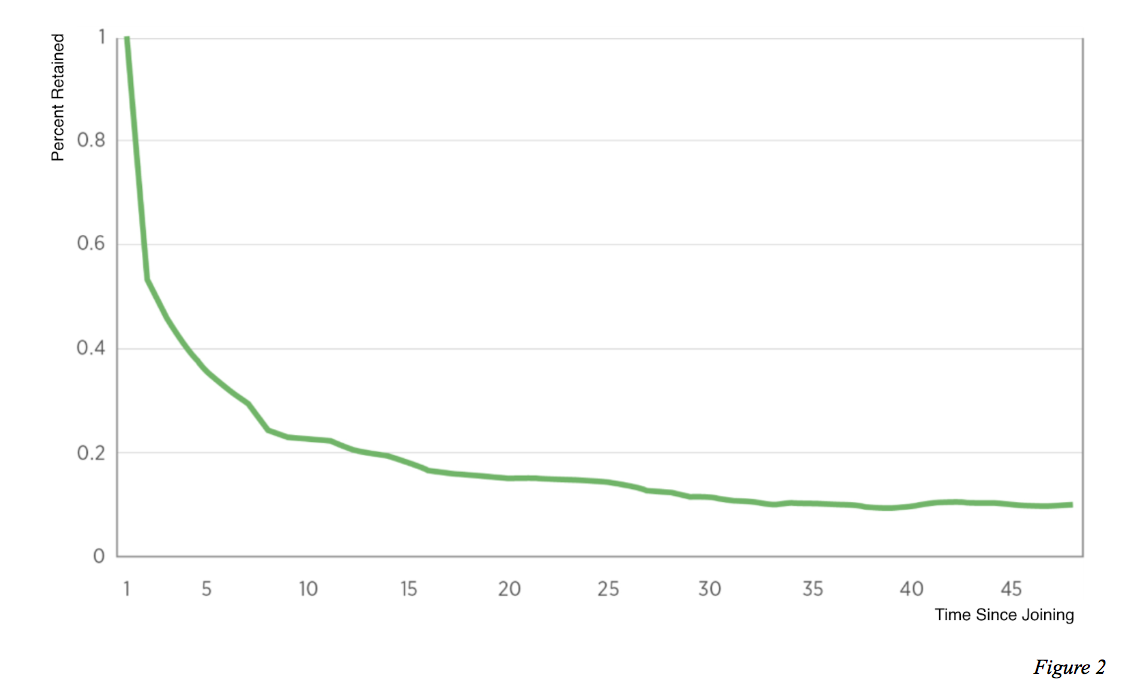 In the Early phase, churn far exceeds resurrection and new users contribute significantly to MAU. The flattening of the retention curve indicates the product has achieved balance between churn and resurrection.

Healthy products during the Early phase 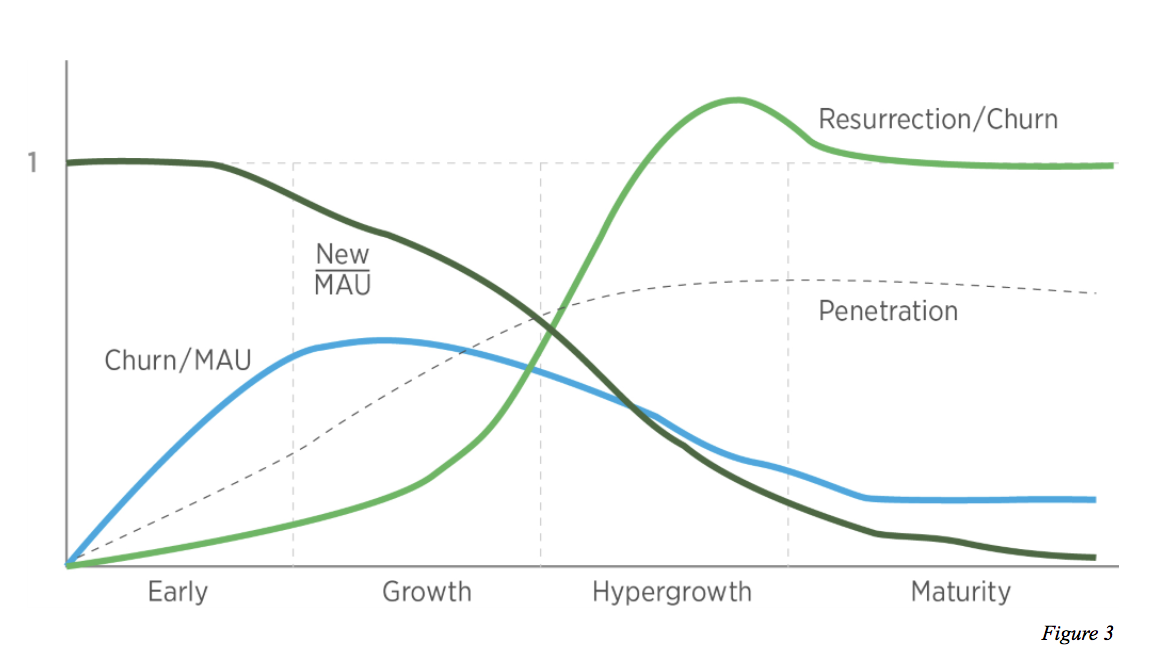 By the end of the Early phase, the product may be adopted by tens of thousands of people who are beginning to use it regularly. However, this does not necessarily indicate product-market fit. It’s important to think about who the next hundreds of thousands of users to adopt the product will be—and what changes should be made to accommodate them.

In the Early phase, penetration with respect to the total addressable market was low and the product grew slowly. Now, in the Growth phase (see Figure 3), growth accelerates (the size of the new cohorts increases) as you begin to achieve product-market fit. Something wonderful seems to be happening: users are finding value in the product and return to the product.

As the active retained population increases, new users become a smaller percentage of MAU. Slowly but surely, the product’s market penetration begins to increase. In older cohorts, retention stabilizes as balance between resurrection and churn is achieved, while in newer cohorts, churn continues to far exceed resurrection. Because older cohorts are a larger percentage of overall users, overall resurrection thus grows relative to churn (though resurrection is still smaller) and begins to contribute significantly to MAU. During this phase, the biggest contributor by far to overall active users is retained users.

Healthy products during the Growth phase

Many of the best products ever built—including Facebook, Instagram, WhatsApp, Amazon, Netflix, Uber and Evernote—have one thing in common: a Hyper Growth phase. During this phase, the one-month (M1) retention levels of newer cohorts begin to increase relative to those of the previous cohorts over the same time frame, thus improving the ratio of resurrection to churn. This typically begins when either 1) a certain level of penetration is reached with respect to the total addressable market or 2) the product becomes very well-known. In addition, older cohorts start to resurrect in greater numbers during this phase and churn begins to decrease. All users, new and old, find value from the product, as shown in Figure 4. 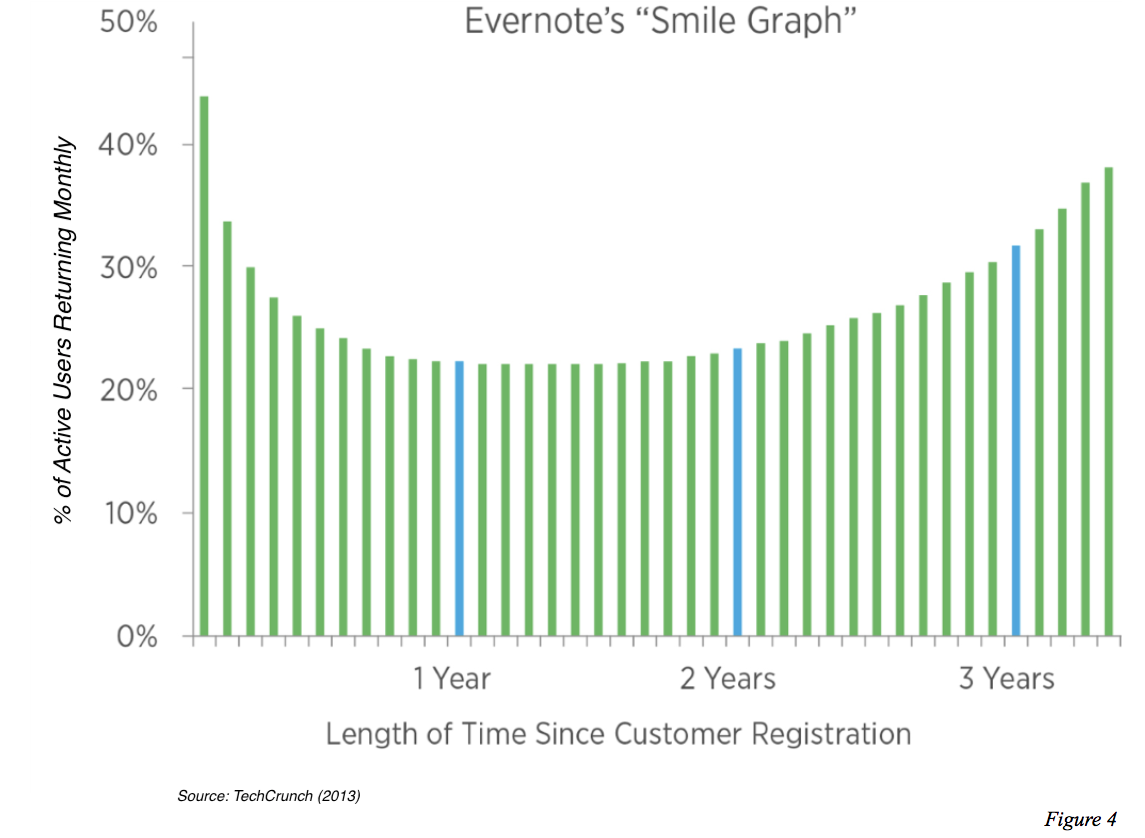 In this period, MAU grows dramatically as resurrection exceeds churn and the product continues adding new users. This may be the fastest year-over-year growth your company will ever experience. All engagement metrics, such as L5+/7, number of sessions and MAU/DAU (daily active users) are strong, and the product has achieved both product-market fit and scale.

After a successful Hyper Growth phase, the product enters the Mature phase, during which it reaches a high level of penetration with respect to the addressable market and has few users left to add. In this phase, the product is no longer growing. Every cohort, old and new, has reached a steady balance between resurrection and churn, and, at the cohort level, the sum of retained users is equal to the overall number of active users. Overall retained users are also a large percentage of overall active users during this phase, and resurrection and churn contribute to a smaller percentage of active users.

Healthy products during the Mature phase

To continue to grow your product after hitting maturity, you must diversify your portfolio and increase your total addressable market. This could mean entering new markets, launching new products, etc.

Ask yourself: Who will the next few million users of the product be? Which countries could benefit from the product that are not using it now? What new features could make the product more valuable in those segments? You may need to rethink your approach to creating product-market fit in order to reach them.

As shown in Figure 5, growth of additional products or in new environments will again follow an S-curve: growing slowly at first, then accelerating, increasing rapidly and approaching an exponential growth rate, and ultimately reaching saturation. By diversifying, you overlap S-curves and allow for continued growth. 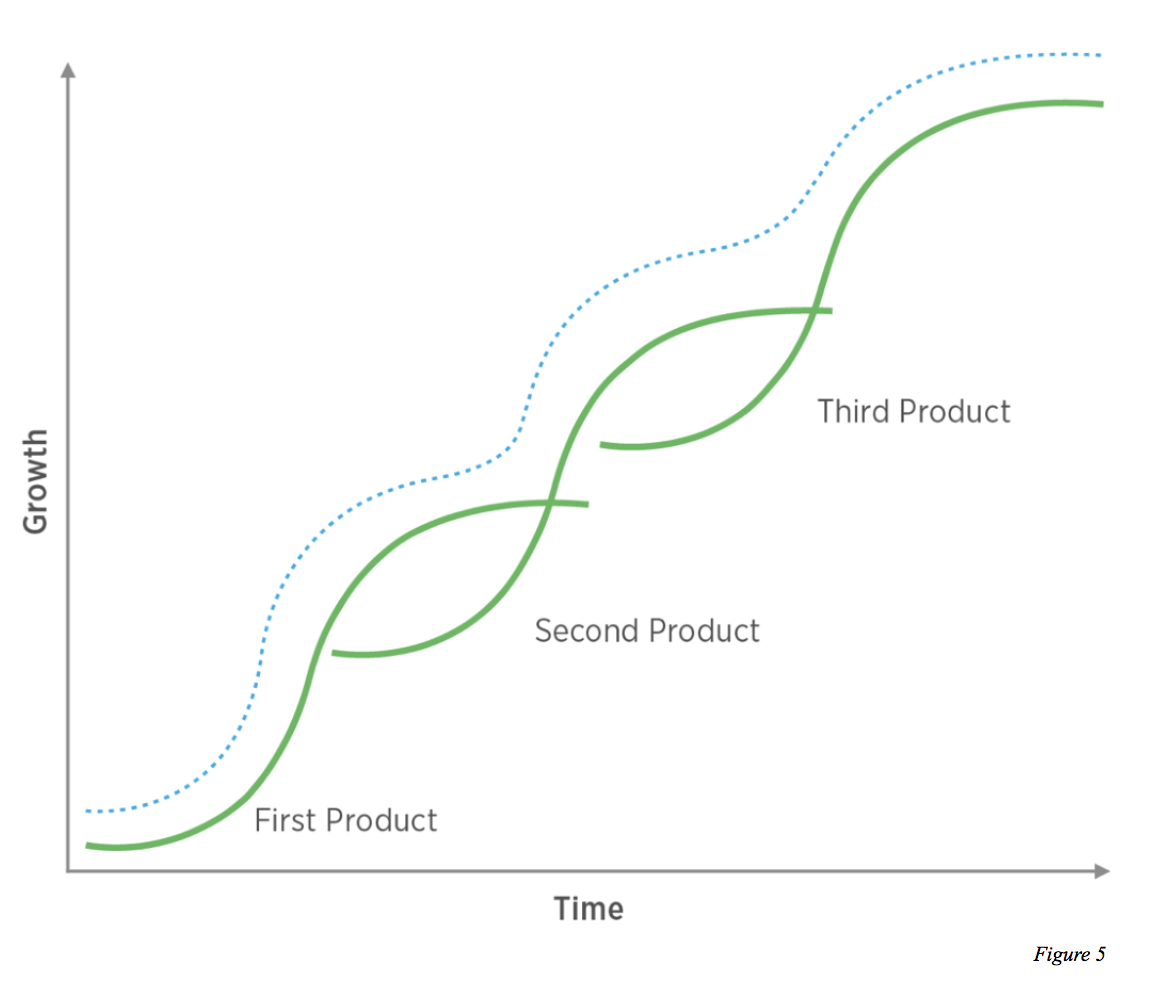 For example, consider Netflix’s journey. The company started its streaming product in the United States in 2007 and went into its Hyper Growth phase in 2010 (see Figure 6). At this time, executives at Netflix had already started laying the infrastructure for international expansion, and the platform formally launched in other countries in late 2010. By the time U.S. growth hit maturity a few years later, the international business (which is itself a series of overlapping S-curves) was driving most of Netflix’s subscriber growth. Most businesses should, like Netflix, think proactively about product and vertical adjacencies while in the Growth phase of their primary products. Delaying the launch of a second act—or failing to launch one at all—will stunt growth. 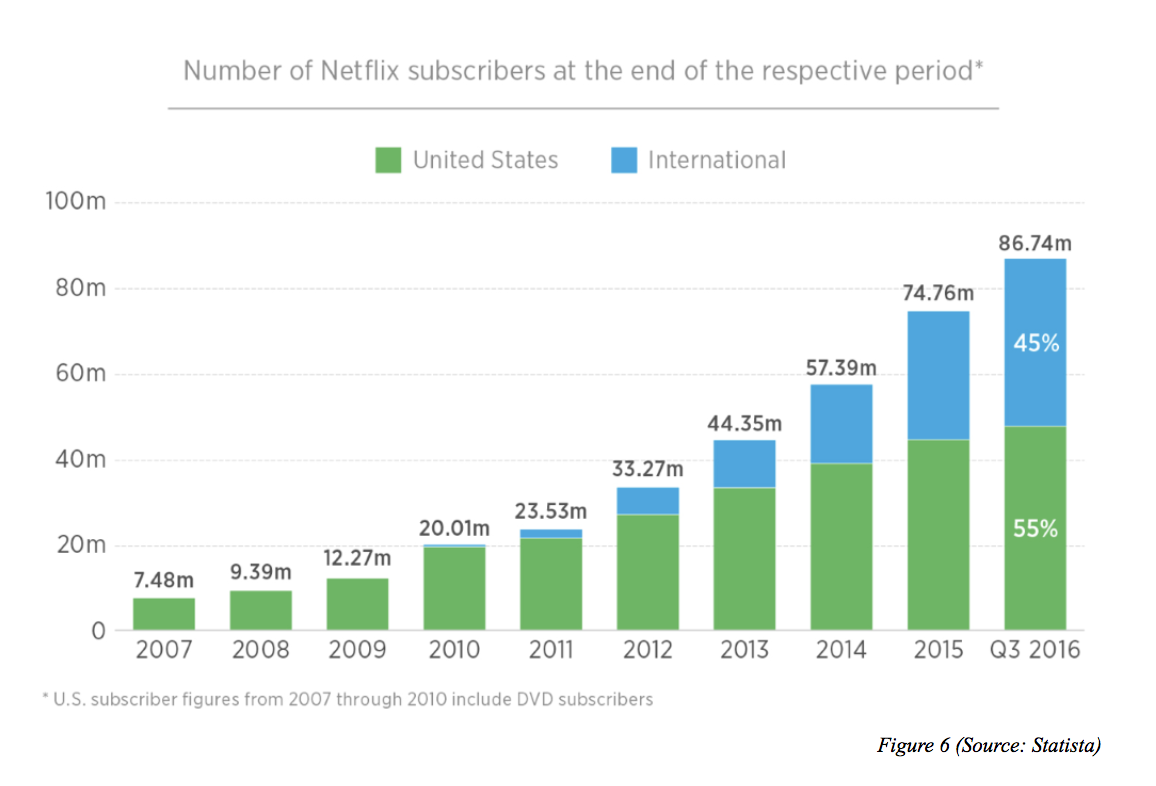 A quick note: the previous sections assume we have chosen meaningful metrics and time frames, both of which are key to properly understanding growth. These factors will strongly influence your view of the balance between new users, churn and resurrection, the three contributors to growth.